This was a collaborative effort between the 20 student class of 2019 in MFA Products of Design. We have created The Datalogue, a four-part stationary machine which emulates the systems and unmasks the consequences behind data collection. Though data mining is an invisible procedure that occurs through countless digital channels, the exhibition transforms it into a visible, tangible process.

Visitors leave with an increased understanding about the collection of data, consequences of big data, and the building of targeted advertisements that are used to influence user behavior.

The exhibition was held specifically in the NYCxDesign 2018, so our primary audience would be the visitors. However, we wanted to target to a bigger audience who are not aware of their online data.
Design Process

The Hamster Wheel, The Claw, The Crank, The Selector, The Final Reveal and Book 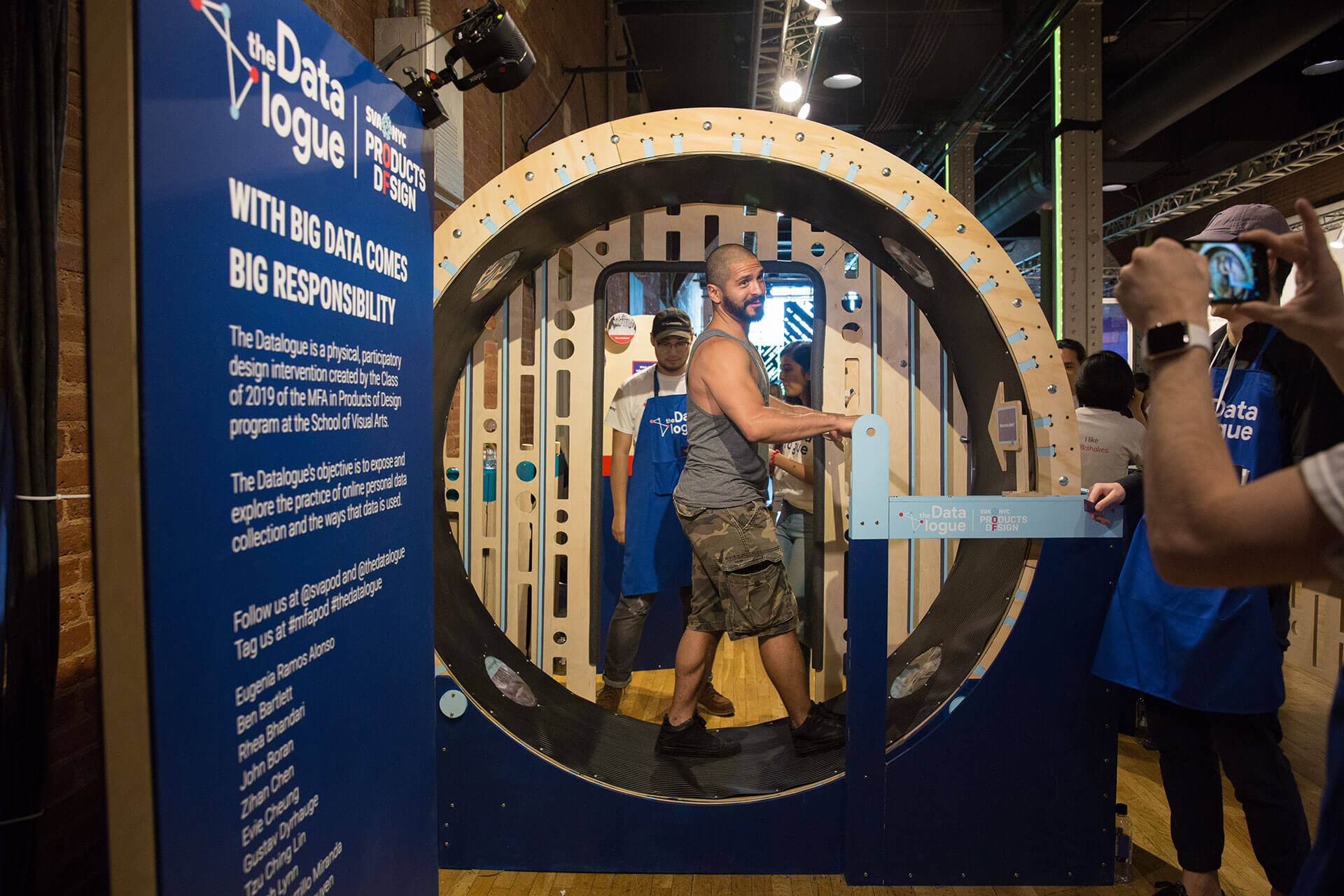 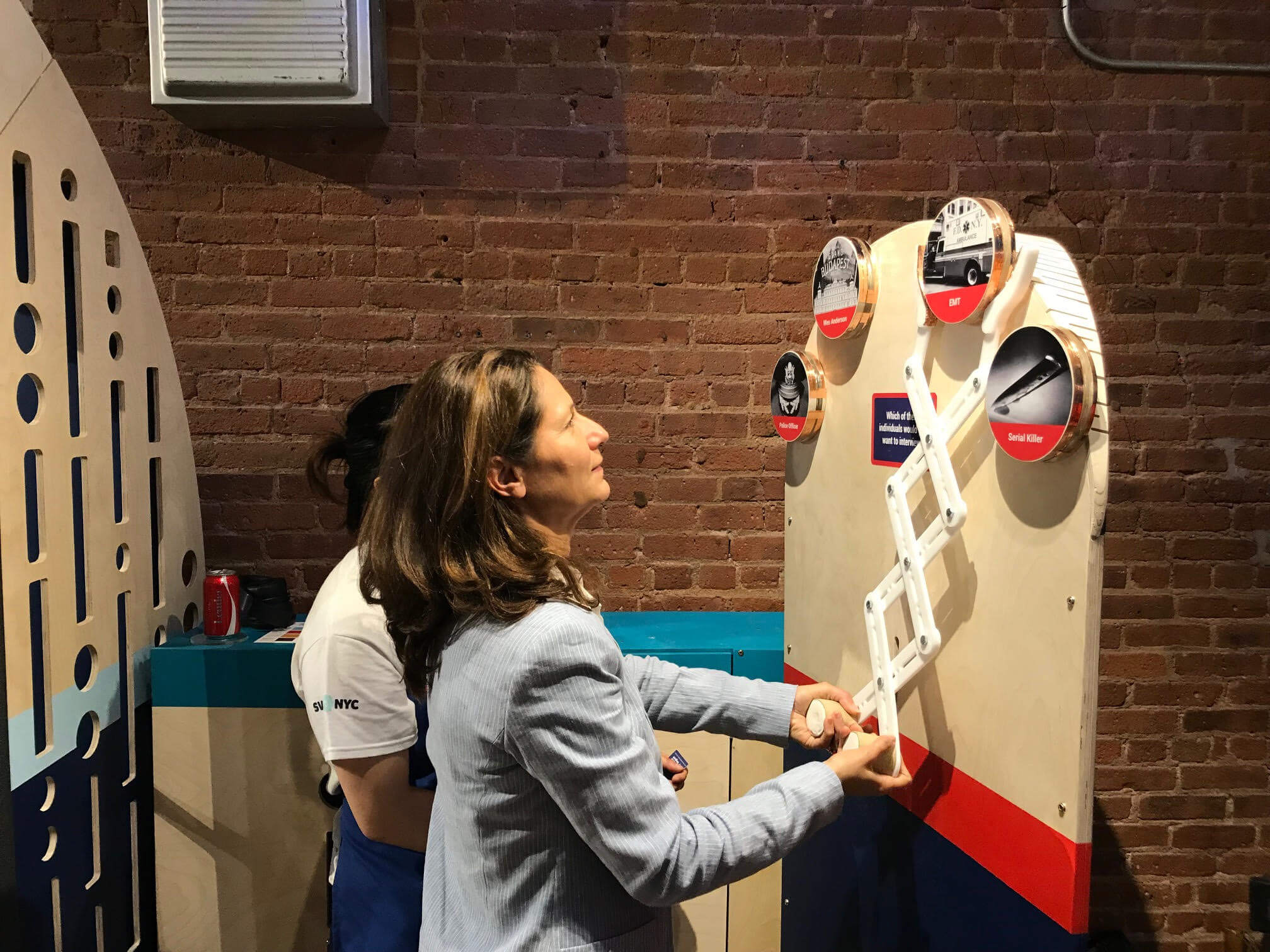 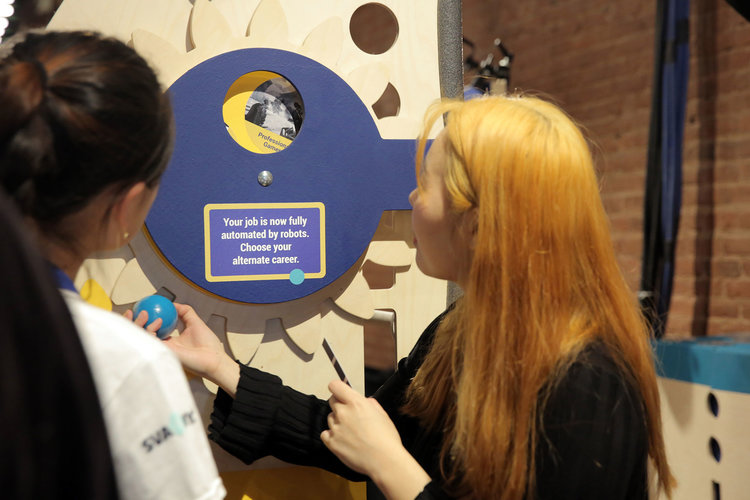 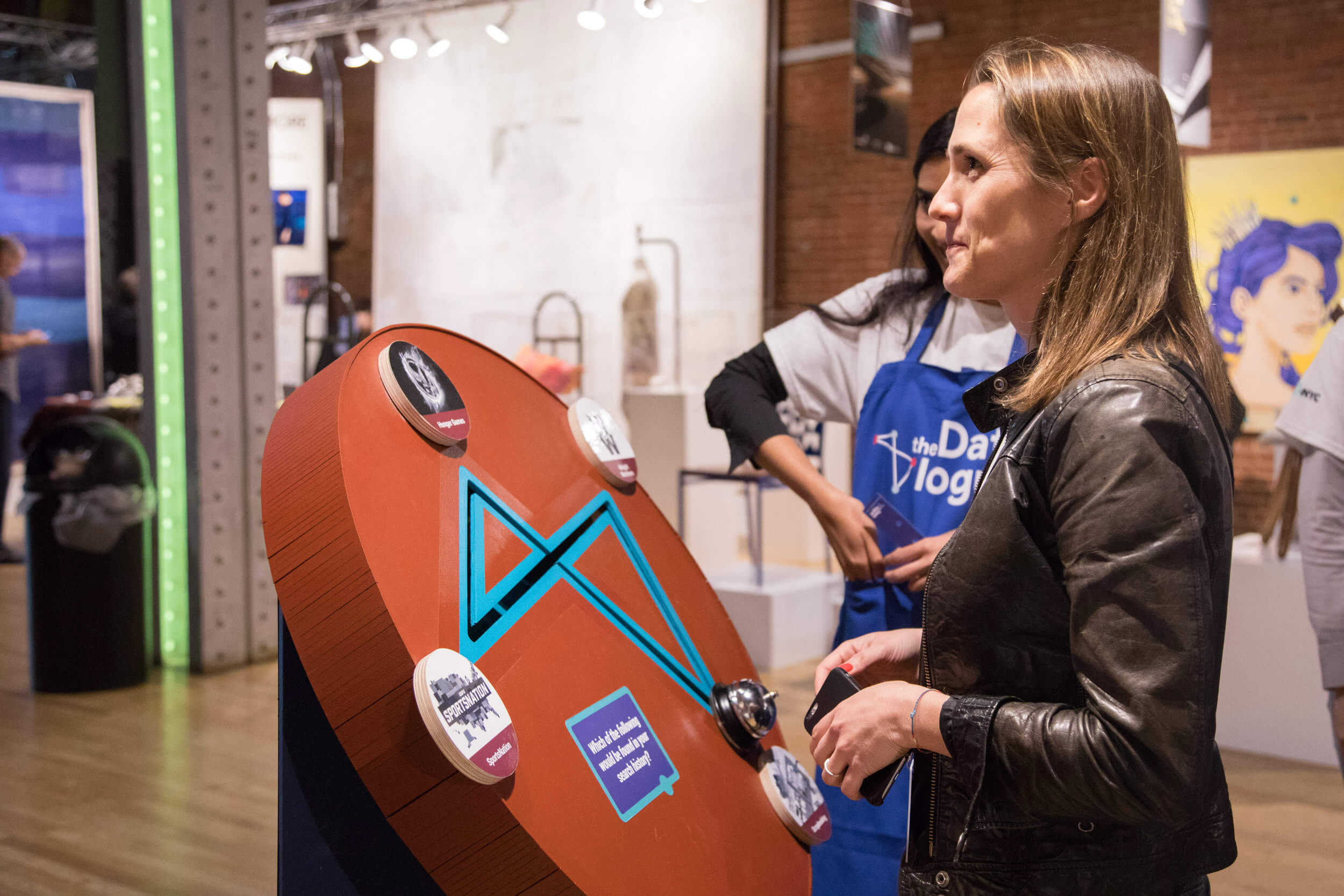 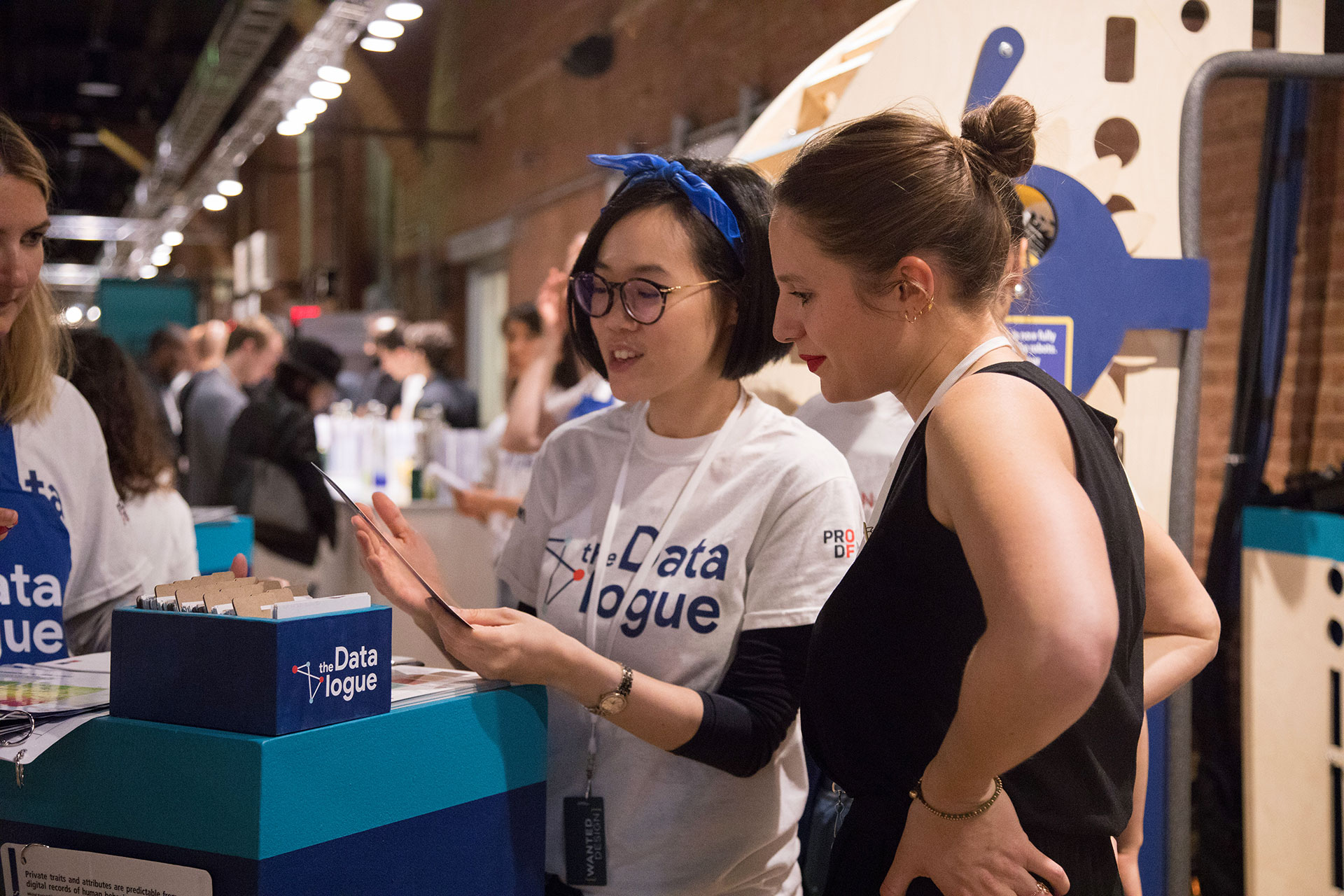 To get a better understanding of user experience for visitors, I conducted the user journey map and figured out where we can design more engaged experiences and raise awareness in the end.

Visually enticing and engaging, the Hamster Wheel entices guests into the exhibition with its carnival-like nature. Once a participant steps into the wheel, they are prompted with the question “Whom do you admire?” and given four choices: Indiana Jones, Mother Teresa, Marie Curie or Steve Jobs.Participants select their answer with a full-body interaction: walking in the wheel until they reach their final response. They discover that the real meaning behind their answer is a correlation to their level of satisfaction with life. 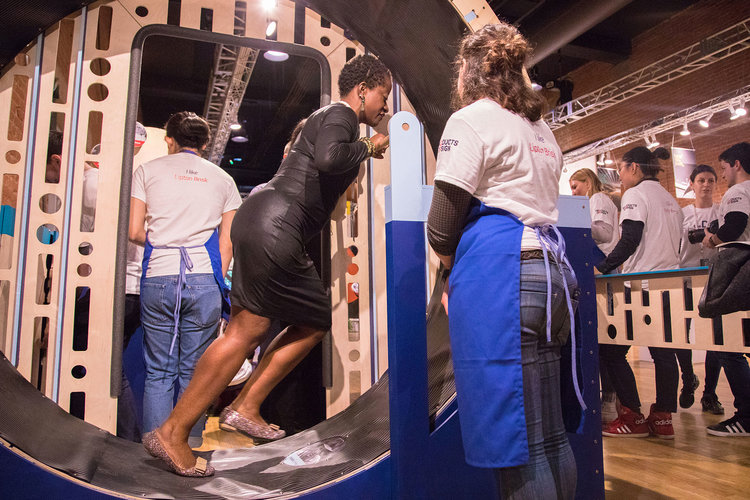 At the next station, participants are asked, “Which of the following individuals would you want to interview?” Again, they are given four choices: Police Commissioner, Emergency Physician, Serial Killer, and Wes Anderson.They are instructed to maneuver a mechanical claw in order to choose the next input on their card. Their final answer corresponds to their level of conscientiousness, whether they are spontaneous or well-organized. 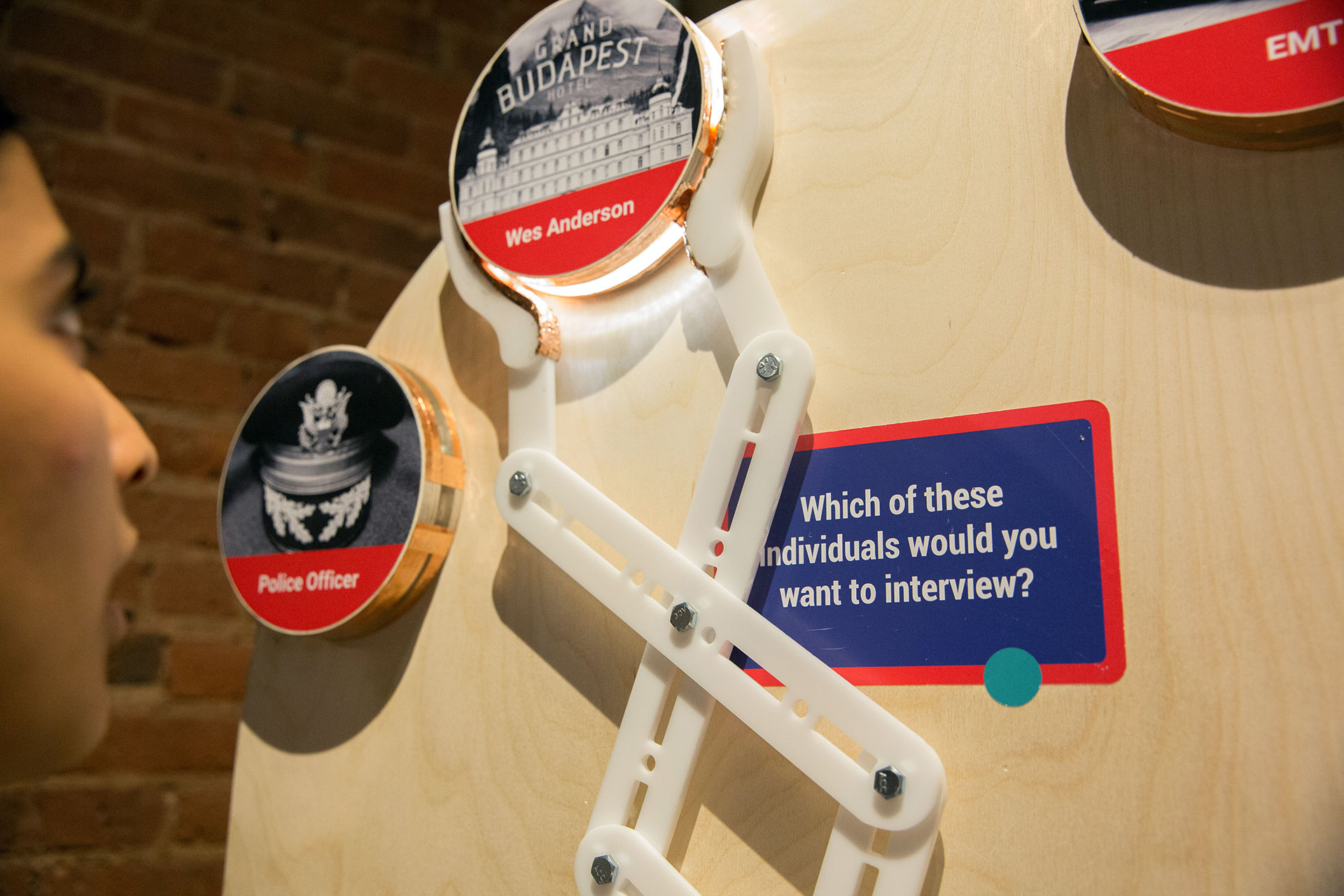 The Crank looks to the future; participants make a choice about a new career, once their job is fully automated by robots. The moving multi-gear form of this interaction is inspired by a similar question that was top of mind during the First and Second Industrial Revolutions. The individual’s response determines their level of extraversion. 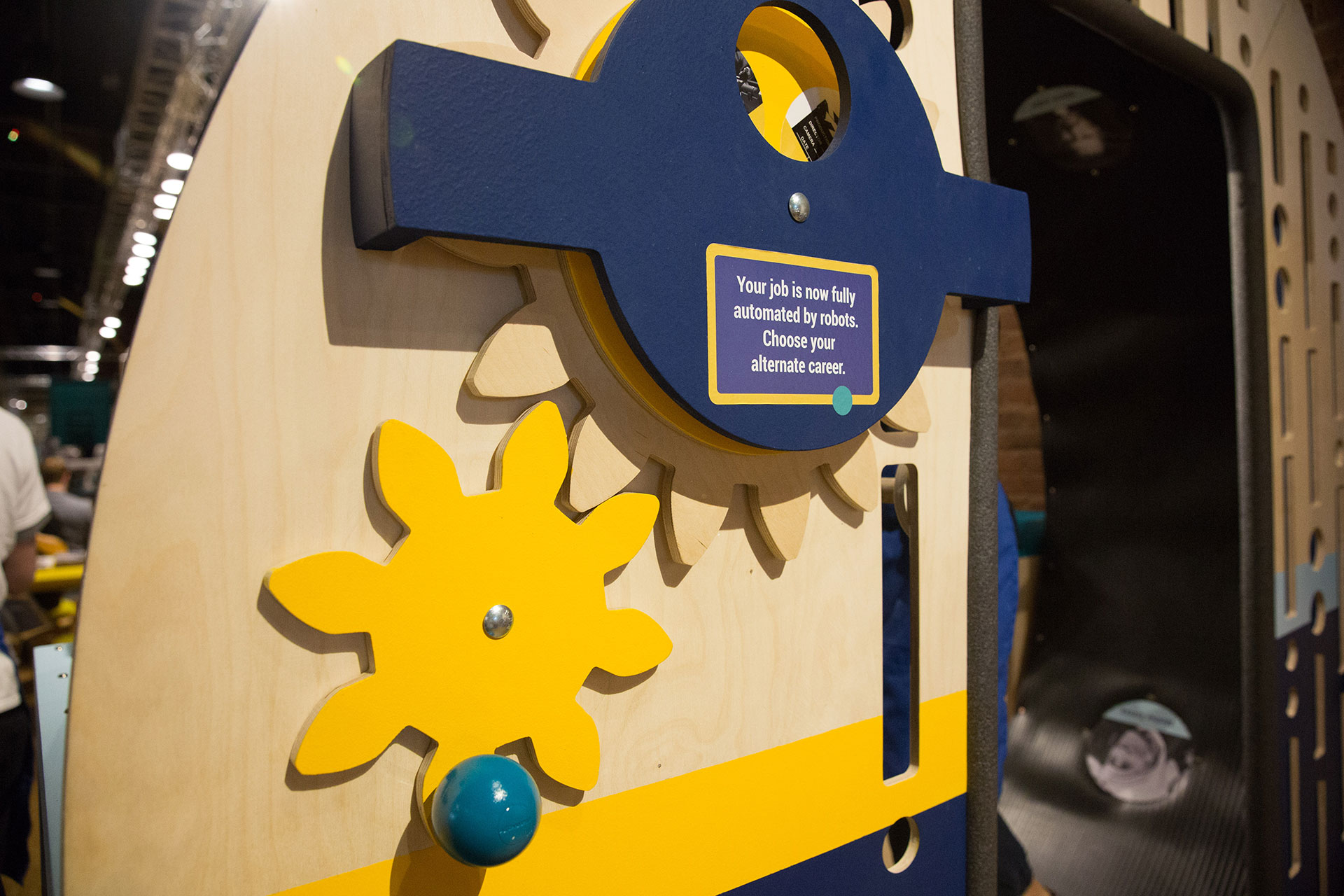 In the fourth and final interaction, guests are asked about the contents of their search history. Their final response illuminates whether the relationship status of the participant. When they have make their selection, they ring a bell, signifying the completion of their “personality test.” 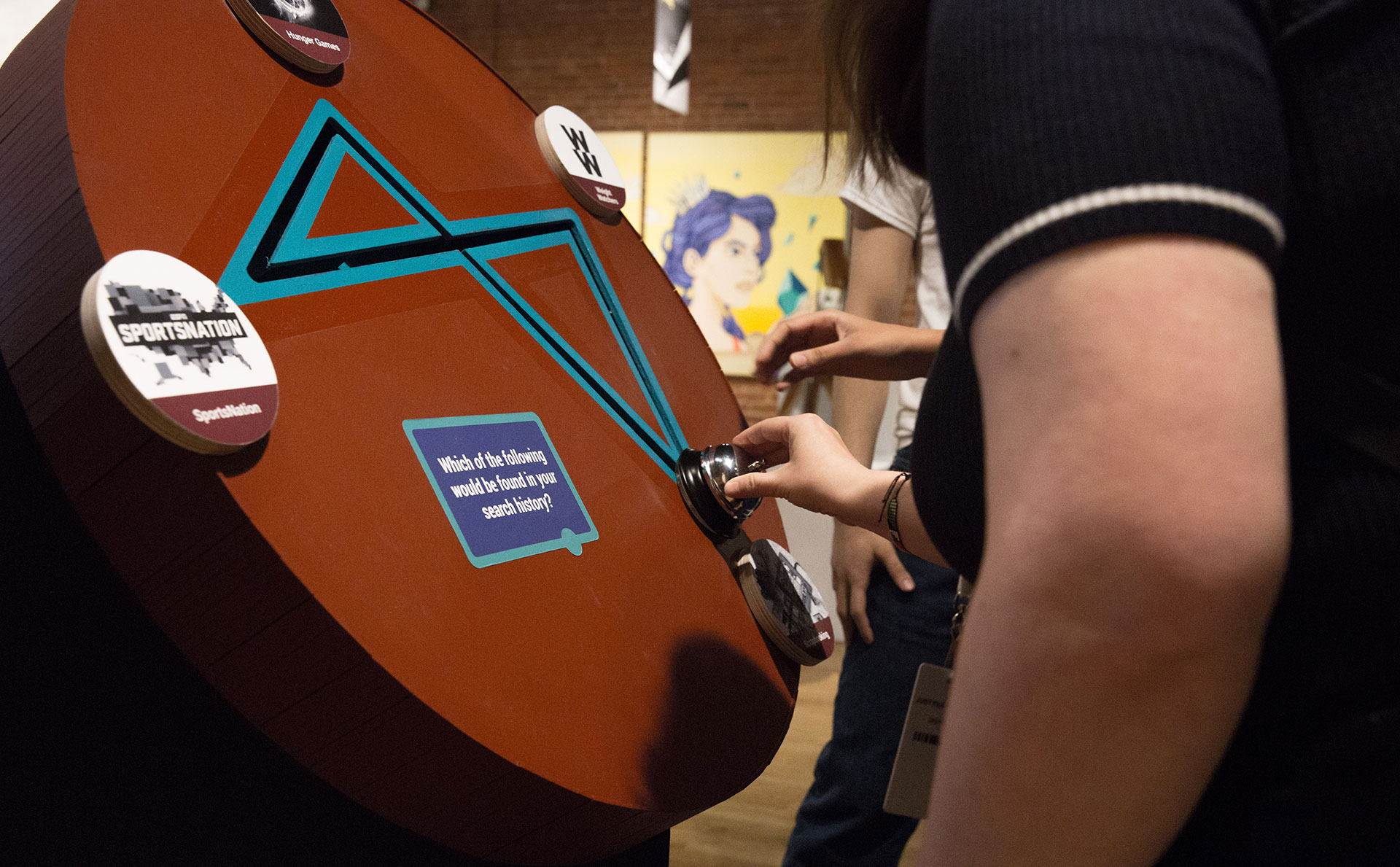 Unbeknownst to participants, each of their responses contributes to the development of an intimate psychographic profile on themselves. In their final station, guests are given a summary of their profile that includes specific personality traits, along with a product selection.
‍
Product selections were created from robust research on the the design studio’s brand values and mission statements, as well as the product’s form and function. Additionally, specific characteristics were extrapolated from each product to correlate them with 1 of 16 possible psychographic profiles.

Visitors leave with an increased understanding about the collection of data, consequences of big data, and the building of targeted advertisements that are used to influence user behavior. 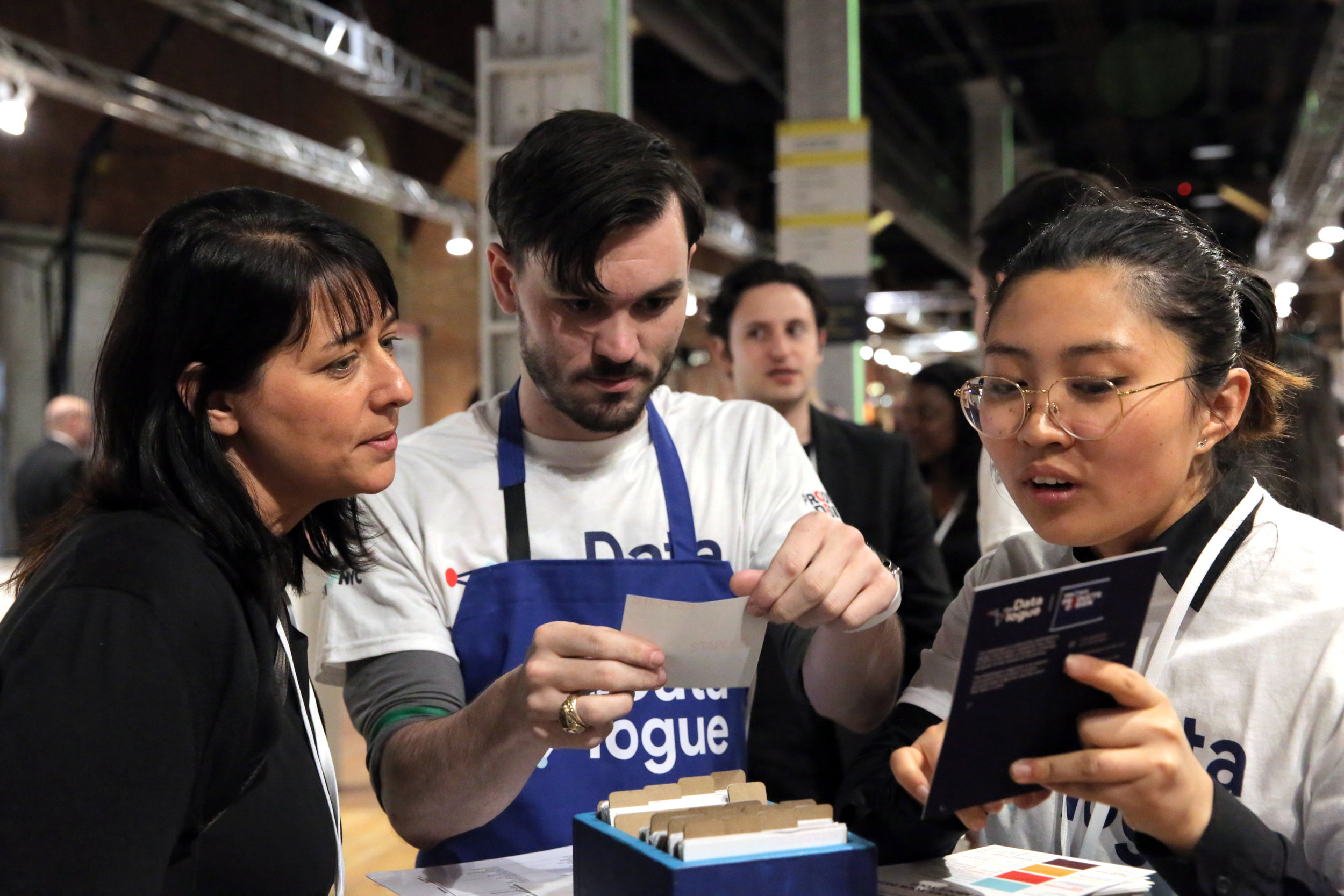 Tone of Voice
The Datalogue is:
Informative
Engaging
Enlightening
Playful
Audacious
The Datalogue is not:
Confusing
Restrained
Monotonous
Naive
Hesitate
The Takeaway
try hover on the cards ;)
‍
In the end, visitors will get the punch card with their 'profile'. And print materials, from tickets to cards, were designed carefully to communicate the same graphic language in order to achieve an extremely consistent visual presence. 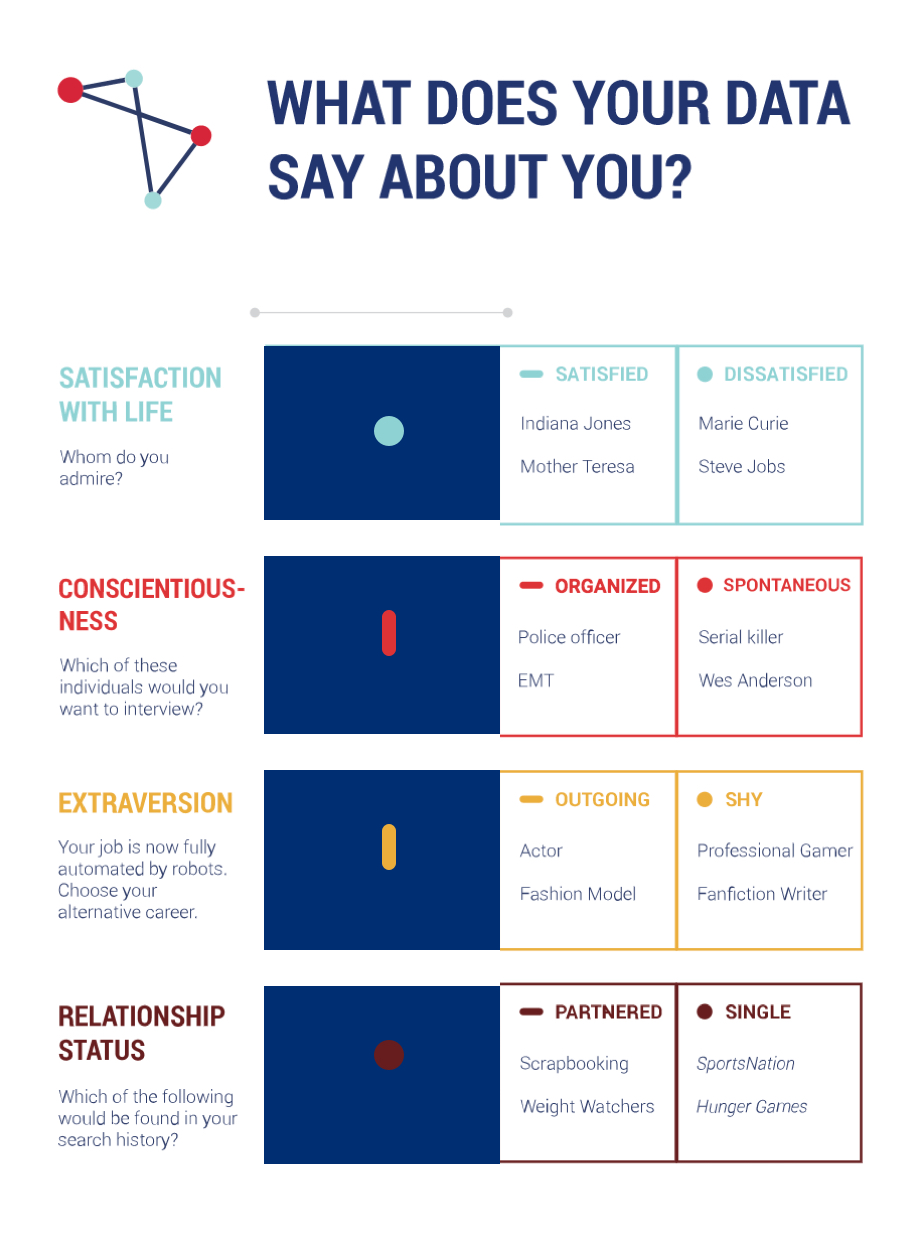 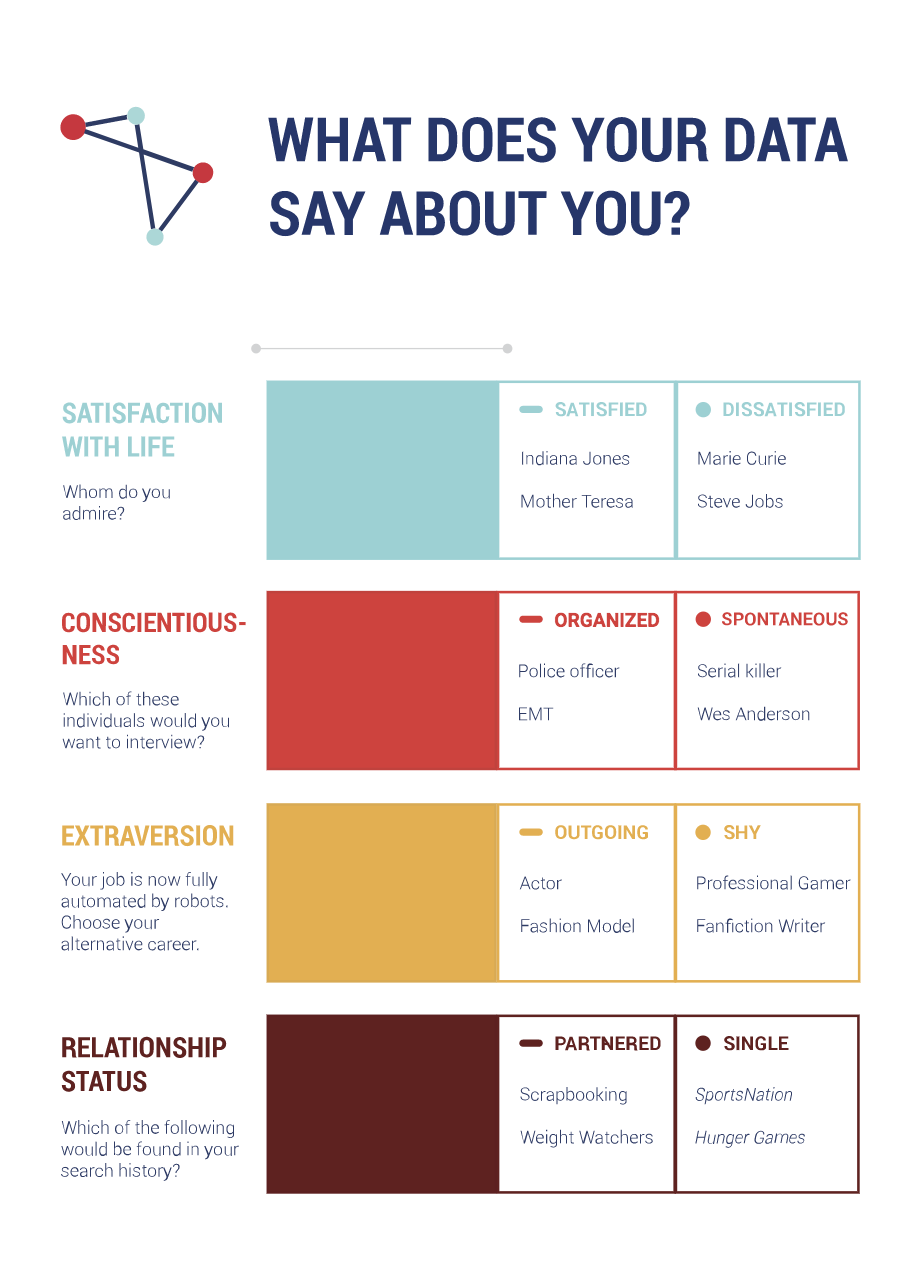 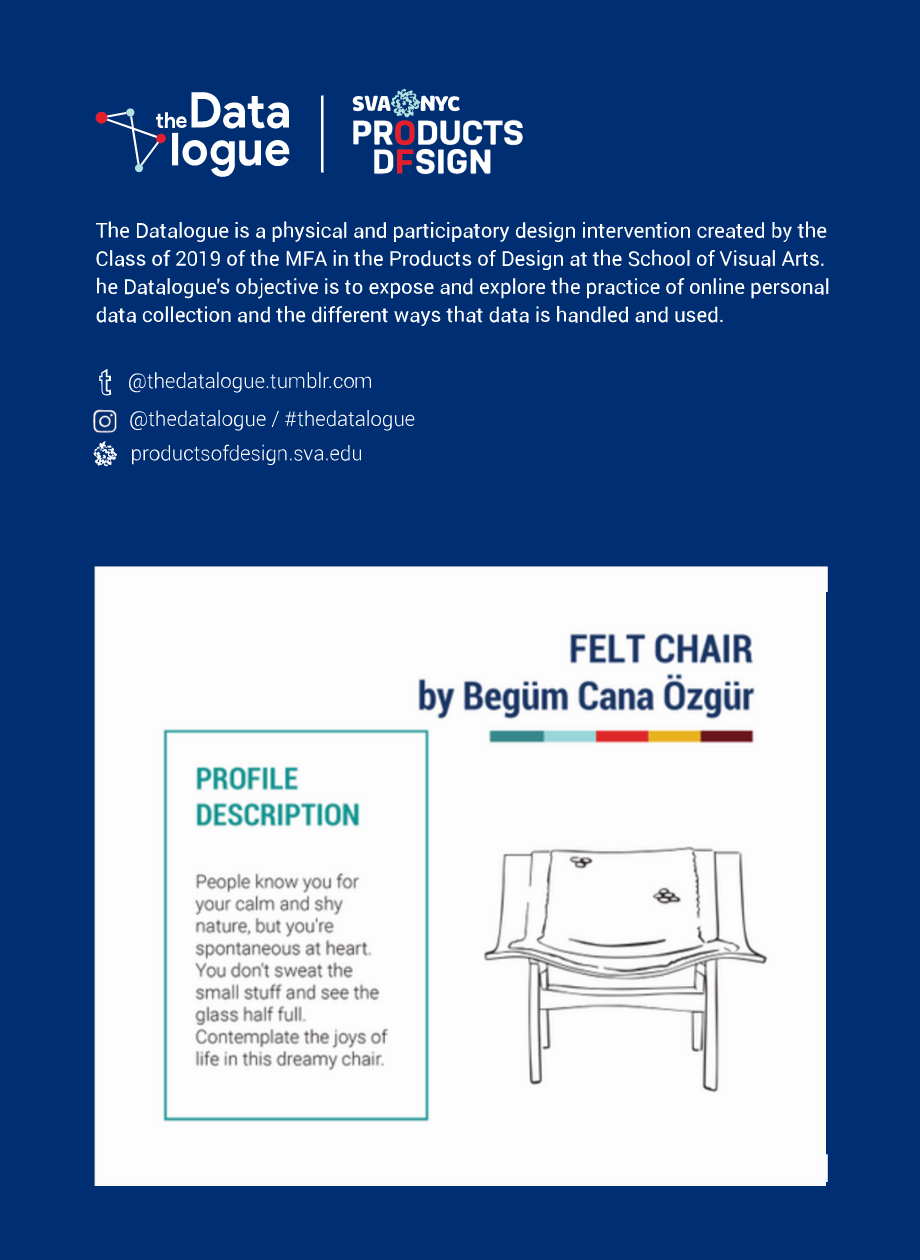 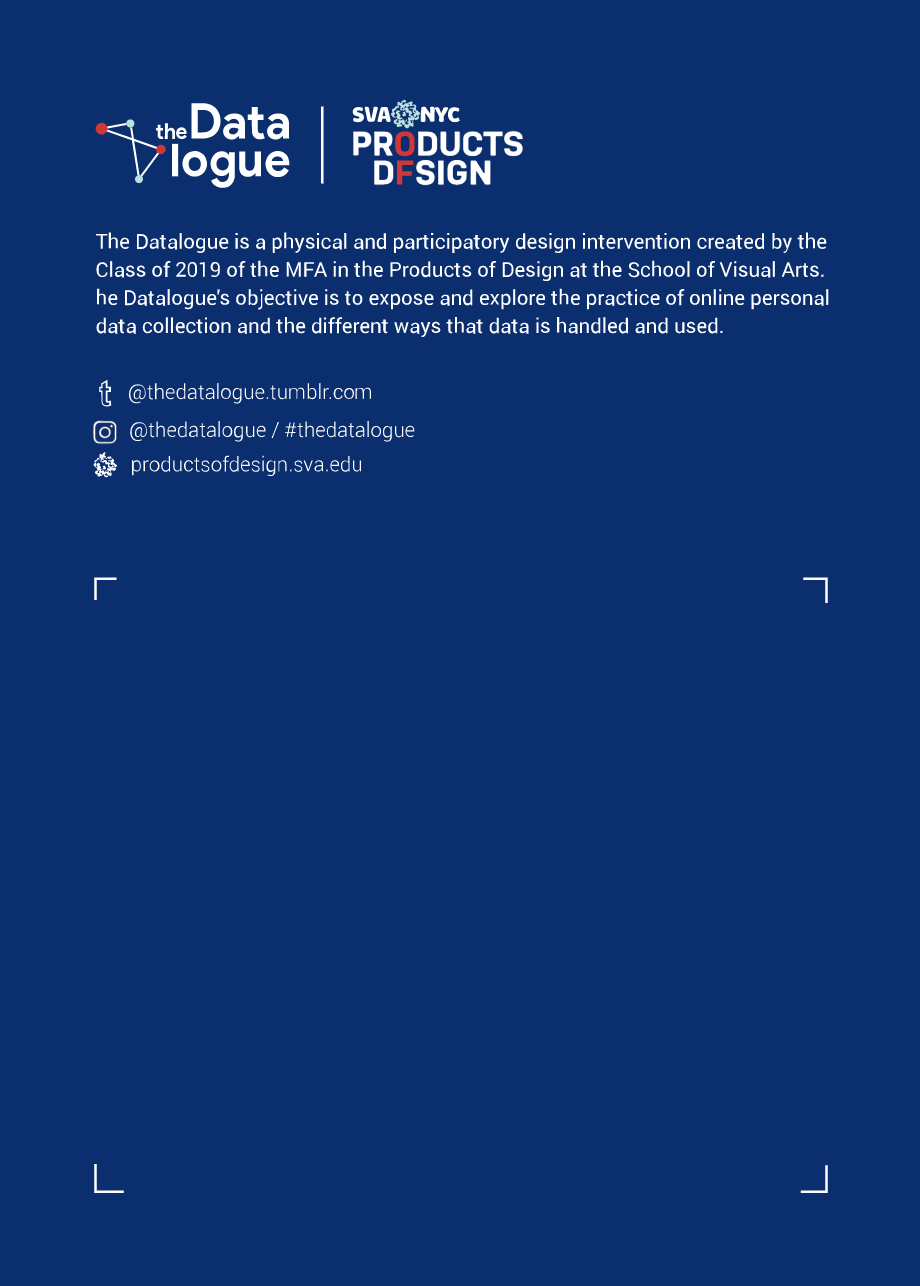 What Did I Learn From This Project

There are so many things I’ve learned and also I’d love to dig into further in the future. Here are some of my learnings.

‍The interaction between designers and users: our exhibition at NYC design week connected with real people, they from many fields, it was really valuable to see how everyone interact with the physical interventions. We built them very well, however, there is still a little gap between some audience that we as a host, need to explain how this work.

‍Translate research into designed objects: as mentioned above, The four categories and choice architecture for answers was drawn directly from this PNAS scientific paper. We spent a lot of time thinking about how we could apply this scientific founding into our products so that users would fully be immersed in and learned about the data situation.

‍Team management and collaborations: working in a team, especially in a large team require constant communication and pure transparency, every team, everyone needs to keep each other on one page. I stretched my muscle not only in designing, teamwork but also communicating in the real world directly with the users. I really appreciate this valuable experience! 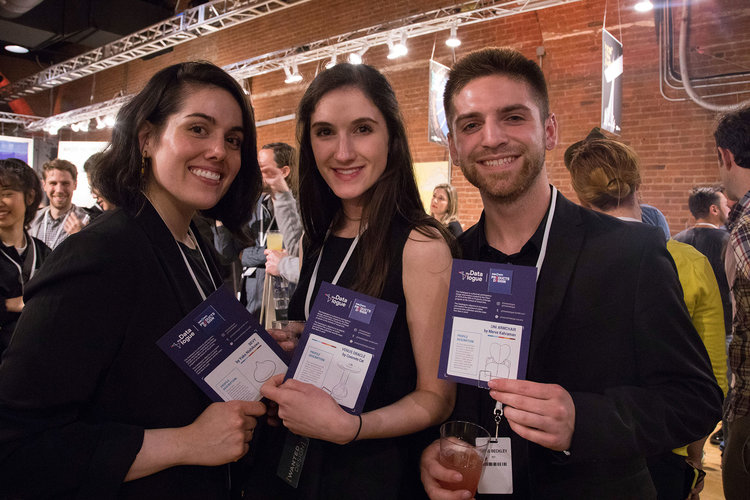 back to work
pre / next